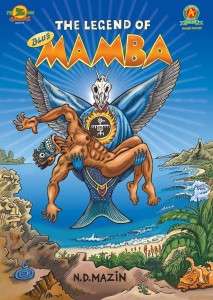 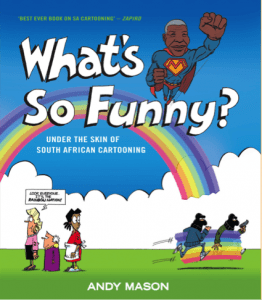 The Legend of Blue Mamba

The Legend of Blue Mamba is a wild and wacky look at the South African surfing scene, wrapped up in a horror comic about the commercial exploitation of surf culture and the plundering of our coastal resources. 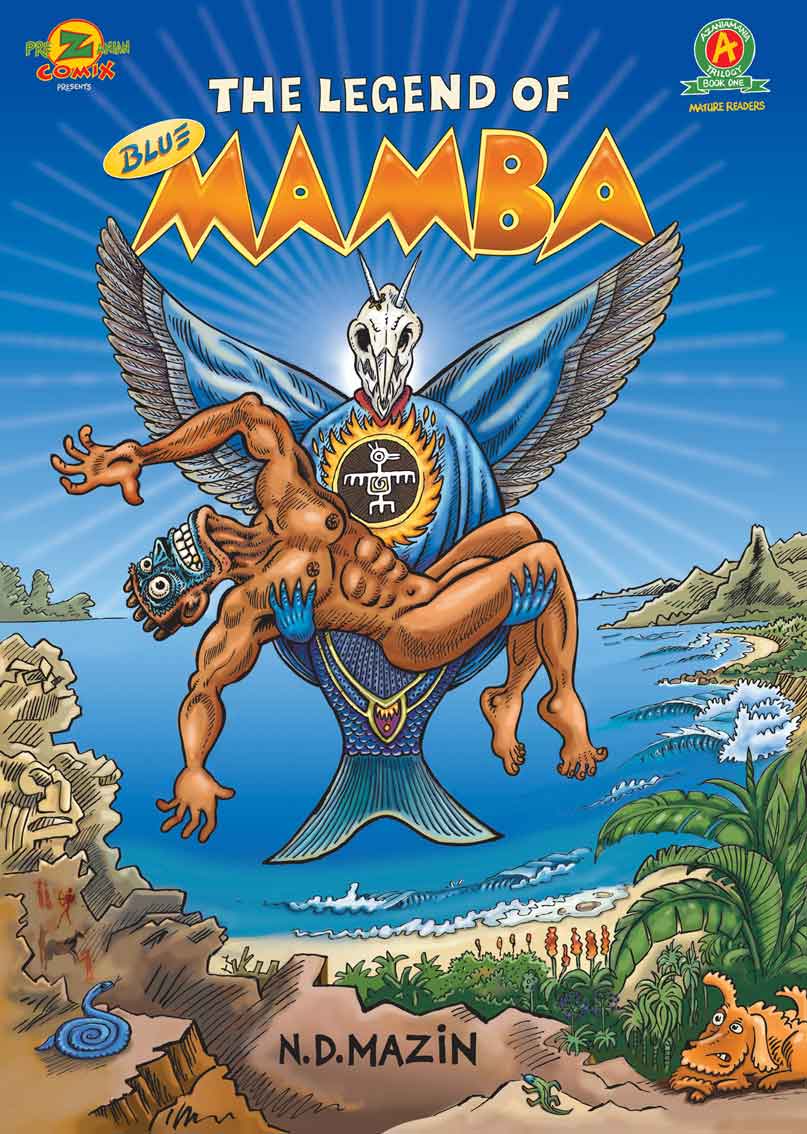 What's So Funny? Under The Skin Of South African Cartooning

A fascinating journey through the history of South African cartooning, tracing a vigorous lineage of satirical art that begins in the colonial period and continues unabated to this day. 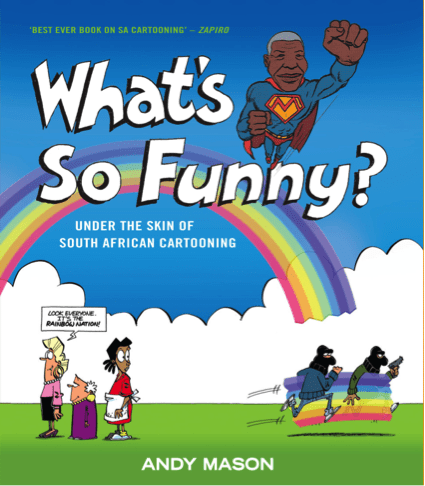 More than 40 years ago, while finishing doctoral studies in mass communications at the University of Iowa, I had presented my history-based term paper in a mandatory seminar, which itself was endurable only after a couple (or more) pints. The first reaction from one of the team of professors was a flippant, “History is bunk,” which I think he attributed to industrialist Henry Ford. None of the other professors, nor my fellow students, challenged this piece of drivel; most of them had little or no interest in historical or descriptive studies. They followed the trends in the discipline at that time – to babble on about ivory tower ideas falsely given credit as being theories and to crunch meaningless numbers. Those were the days when quantitative research ruled the roost, almost completely shutting the door on qualitative studies. Fortunately, an equilibrium has since been established.

Andy Mason’s magnificent book, some of the thinking behind which came out of his much more recent graduate studies, would not have been accorded much academic importance in those days. First of all, it definitely debunks the history is bunk idea, neatly fitting the history of South African cartooning into well-researched socio-cultural-political contexts; and second, it is highly readable history, interspersed with personal accounts of his own role in South African cartooning and his interactions with many cartoonists. Mason knows much about which he writes; he has been an important cartoonist and comic art historian, professional organizer, and promoter since the 1970s. Mason, who is white, has also been a long-time champion of black cartoonists, collaborating with artists such as Mogorosi Motshumi, Mzwakhe Nhlabatsi, Percy Sedumedi, and Mothobi Mutloatse on comic strips and on alternative and educational comics projects he helped conceive, and constantly trying to stimulate interest about comics and cartoons among the blacks. These and other experiences Mason passionately describes in What’s So Funny?

The book, consisting of 20 chapters, is divided into parts called, “The Illustrated Other,” about the origins of South African cartooning in the 1800s, and “Ink and Blood,”concerning cartooning during apartheid and the campaigns leading up to and after independence. Mason uses much secondary material in telling the early history, but he also dug into private archives, libraries, and used book stores throughout the country to find original books, newspapers, and documents. The second part of What’s So Funny? is based on interviews with at least 31 cartoonists, and other contact with them, and personal Recollections of his own work.

Mason goes deep into the history, starting with racist depictions of South Africans by British satirist George Cruikshank and other cartoonists, and images (some satirical and caricature in style) created by documentary artists such as Samuel Daniell, Charles Bell, James Saunders King, and Thomas Baines. He not only provides fascinating accounts of these men’s works, but also challenges their accuracy in insightful detail. The book’s first part also includes portrayals of the Boer War by European cartoonists, descriptions of early satire newspapers such as Knobkerrie and The Owl in the late nineteenth century, and, in an entire chapter, the origins of the stereotypical Jewish character, “Hoggenheimer,” by Daniel Boonzailer, since trotted out by cartoonists on numerous occasions.

Rather quickly, Mason takes his history to the mid-twentieth century, not because he lacks information on the period in between (which he certainly does have as evidenced in his papers in my Cartooning in Africa and International Journal of Comic Art ), but because he wants to get to contemporary racism relative to cartooning, which he knows much about personally as an anti-apartheid cartoonist activist. He leads into his “Ink and Blood” section with profiles of liberal cartoonists, such as David Marais, Jock Leyden, and Abe Berry, and how they handled race; a chapter on Len Sak’s black character “Jojo,” and interesting accounts of Marty Wilson’s ethnographic “humorous native” cartoons based on “misunderstood instructions,” and the controversy surrounding Tintin in the Congo.

The memoir which Mason uses to launch “Ink and Blood” is an excellent prelude to the histories of the revolution in South Africa, and in cartooning, which followed. He relishes The memories of his and others’ student press cartoons, alternative comics, and educational/ social consciousness-raising comic books based on Paulo Freire’s participatory education philosophies; he discusses with a critical eye the meaningful work carried out by The Storyteller Group, The Story Circle Group, The Durban Cartoon Project, and others to inspire interest in comics while serving the public good. Much space is devoted to “art rebels” Anton Kannemeyer and Conrad Botes of Bitterkomix fame and how their art of outrage stunned and enraged South Africans at times before entering the higher echelons of museum and collectible art, and to the nations’ most popular comic strip “Madam & Eve.”

In almost encyclopedic fashion, Mason provides valuable information on other liberal cartoonists, such as Richard Smith, Derek Bauer, Dov Fedler, Dave Anderson, Tony Grogan, and a host of others, too many to include here. Mason ends the text with an expanded, analytical chapter on political cartoonist Jonathan Shapiro (Zapiro), and the concept of freedom of expression which Zapiro relentlessly and bravely defends, and a personal memoir concerning his (Mason’s) fitting into Africa as an “Englishman.” After that, he does something else that is unusual; he illustrates his extensive notes, enriching even further the visual appeal of the book’s many sharply-presented images.

What’s So Funny? is the best history of South African cartooning by a long shot, benefiting from Mason’s personal involvement in cartooning, and his eruditeness in fields afar as history, psychiatry, philosophy, cultural studies, Marxism, literature, aesthetics, and politics, all blended in an unpretentious, enjoyable, and informative style that will appeal to practitioners, researchers, and aficionados of comic art alike.

Because of Mason’s deep passion for his subject, this book came not just from his brain and computer, but also from his heart.

This short review will not do justice to this considerable study into cartooning which Zapiro describes as by far the best and most politically astute account ever of South African cartooning.

Mason takes us through the work of Cruikshank in his 1819 cartoons, portraying the prototype cannibal ogres as representations extracted from European folklore tradition and plonked onto African soil to give voice to the fear of the unknown faced by British immigrants; through the political work in the Afrikaans press by Fred Mouton and others who developed a visual language of swart gevaar (black peril) represented by darkness, drowning and suffocation; through the English-speaking liberal cartoonists who employed scenes of whirlwinds, hurricanes and bushfires to represent the ‘winds of change’; through Daniel Boonzaier who traded on the anti-Semitism of the Anglo-Boer war period to demonise the Randlords in the figure of Hoggenheimer; to David Marais who used the Second World War period to demonise Afrikaner politicians by dressing them up in Nazi uniforms; and Jock Leyden, the affable Scotsman who gave voice to the English tendency to remain separate and aloof, as if raised slightly above everyone else, with an emergency return ticket lodged like an insurance policy in the back of the mind; and finally to his great friend, Zapiro, who has been challenged by others as being guilty of racism in his post-Polokwane cartoons, which depict Zuma as an ogre–like caricature with a double-domed head, which bears an uncanny resemblance to the Cruikshank cannibal ogres of almost 200 years ago.

The wheel has turned and we are back where we started. Mason concludes by saying he has no idea how the next chapter in the South African story is to unfold but that our cartoonists will continue to enrich the life of the nation. This is a serious history of a fascinating aspect of our everyday lives and deserves considerable attention.